Top 10 Reasons to Visit the Ottawa Beer Fest this Weekend! 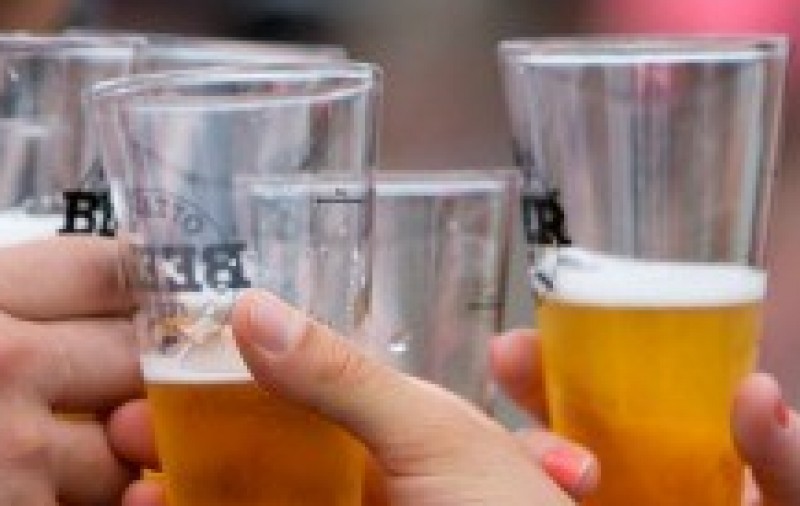 The Ottawa Beer Fest is Eastern Ontario’s largest beer fest, and with over 250 different beers to try, (not to mention some ciders and wines), great food, games, beer school, and live entertainment, there is something for everyone!  In its 7th year, the Ottawa Beer Fest has grown into the premiere event for beer lovers of all kinds to gather and enjoy in Ottawa. Here is our list of the Top 10 Reasons to attend:

#1 - BEER - Yes, you just can’t start a list like this without beer at the top.  From craft breweries, to micro and nano breweries, and everything in between, the festival is a beer lover’s paradise.  Your Beer Lover’s Admission Ticket comes with 10 beer sample tickets and your sample mug so you can get sampling right away!

#2 - GET YOUR GAME ON - The Games Room in the Aberdeen Pavilion is chock-a-block full of fun activities to test your skills while you imbibe.  Human Foosball, Beer Pong, Golf Pong, Pinball, Axe Throwing (yup, it’s true!), Dodgeball Radar Speed, there’s so much more to do at the festival than just drink beer.

#3 - MAY WE ENTERTAIN YOU - The live music stage presented by Live 88.5 is rockin’ this year with tons of great local acts to keep you in the groove.  With a mix of singer-songwriter, rock, roots, blues and even a bit of disco, the live stage has acts scheduled back to back to ensure you have an awesome soundtrack to pair with your beer.  See the full line up here

#4 - GET SCHOOLED - Improve your Beer IQ and attend a few Beer School classes!  Hosted by Beer Sommelier Jeff O’Reilly and with special guest David Brophy, Head Brewer at McAuslan, Beer School is your chance to learn beer appreciation, beer pairing, or gain a deeper understanding of the brewing process. A must for all serious beer aficionados!  See the full schedule here.

#5 - YOGA ON TAP - Yes, we said it!  Yoga and Beer DO go together! Kick off Saturday’s session at the Ottawa Beer Fest with yoga and a mindful beer tasting.  Join Yoga on Tap before the festival gates open for an all levels vinyasa yoga practice followed by a 4 sample beer tasting of Ottawa’s local breweries, guiding your beverage experience beyond the malt and hops. Namaste!

#6 - COMPETITION RULES - Did you know you can sign up with 4 of your friends (teams of 5) for a little friendly competition in our Games Room?  12 minute rounds of Beer Pong, Golf Pong, Human Foosball, and more for a 1 hour competition with awesome prizes up for grabs! What are you waiting for??  Sign Up Here.

#7 - TEA FOR TWO - Not into beer?  (You crazy rebel you). How about trying some hard iced tea, or a refreshing cider?  The festival has several great non-beer bevvies lined up including Hey Y’All Hard Iced Tea, Georgian Bay Spirits Co., Blackfly Mixed Cocktails and McAdam Urban Cider.  So forget those beer-drinking fools you came with and enjoy YOUR favourite drink at the Festival.

#8 - MY CUP RUNNETH OVER - Once again this year the Ottawa Craft Beer Run is being held in partnership with the Ottawa Beer Fest on Saturday at 8:00 pm.  All those folks dressed up in neon running gear? Yes, now you know what’s going on. All proceeds of the run go to support the Ottawa Boys and Girls Club, and runners get a full festival pass and a beer at the finish line!

#9 - SAY CHEESE! - Did you know that beer and cheese make a great pair? Resident Beer Sommelier Jeff O’Reilly is ready to explore one of the world’s best food and drink combos when you join the tasting session at Beer School.  Due to its popularity, this presentation is available on both Friday and Saturday at the festival.

The Ottawa Beer Fest is THE place to be this weekend, June 15th and 16th at Aberdeen Pavilion, Lansdowne Park.